Showing posts from August, 2009
Show all

Change the Look of Your Venue with Lighting 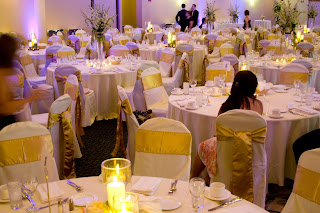 I recently coordinated an event for lawyers from San Francisco who chose the ballroom of a local hotel for their event. Most hotel ballrooms look somewhat alike - same nondescript beige or light brown walls, airwall tracks in the ceiling and air walls pushed against the end walls. Some of the better hotels try to improve the look by installing decorative light fixtures, which help to lessen the "conference room" feel, but can't disguise it entirely.

For this event, the clients chose to use decorative lighting to totally change the look of the room, as seen in the photo (compliments of Tana Photography). Columns of purple light shined upward, against the walls, creating a deep purple glow close to the floor and suffusing the room with a soft lavender glow. The room looked elegant and inviting.
You can use lighting in various ways to add to the ambiance of your event, wherever it is held. Though lighting an entire room can be expensive, there are ways to minimize cost, suc…
Post a Comment
Read more

August 21, 2009
Many quinceaneras are held in southern Idaho each year. Like a Bat Mitzva in the Jewish culture, the party celebrates the transition from childhood to adulthood for Hispanic young women. The party is held on or near the young woman's 15th (quince) birthday. The event often includes a celebratory Mass followed by a reception for several hundred guests. The size and elaborateness of the party depends on the honoree's preferences and her family's budget. It is often larger and more complex than her future wedding.

Planning usually begins a year in advance and will include the honoree's personal preparation for the religious Mass, choosing a location for the party, selecting sponsors and members of the court of honor, as well as choosing and booking vendors. Sponsors are adults who are close to the honoree and who are willing to help finance the festivities. They may include aunts and uncles, godparents, and close family friends. Sponsors should be invited to participate w…
Post a Comment
Read more

The Latest Tacky Idea: Host Your Own Shower

August 06, 2009
I just read an article about a couple in Tennessee who hosted their own bridal shower. In the invitations the couple included a "wish list" of gifts, the first of which was money. The party was a co-ed potluck, so guests were expected to bring both food and a gift of the couple's choosing. I wonder if guests were also told what dish to bring?

If the couple wanted to have a party, that is great, but to turn it into a host-your-own shower is not only rude, but greedy as well. Surely someone in their circle of friends and family would have been happy to host a shower if given the opportunity. Or, oh no! (gasp), they could have not had a shower at all and it would have been okay.

What's next - a host-your-own baby shower, asking guests to provide everything from bibs to the crib? Let's hope this tacky idea dies a quick death.
1 comment
Read more
More posts