Showing posts from 2004
Show all

December 24, 2004
Our newly redesigned web site went live yesterday - yeah! It has been two months of changes and technology challenges to get it up, but hopefully it will be an even better marketing tool than the previous one. The site can be viewed at www.memorable-events.com. Let us know what you think.

If yu live in southwestern Idaho, be sure to join us at the 25th annual Wedding Party Show January 8 and 9 at Boise Centre on the Grove. Over 70 of southwestern Idaho's most professional merchants will be there to help with wedding planning ideas. Prizes will be given every half hour with 3 grand prizes of $1,000 given after each fashion show. Information is available at www.weddingparty-boise.com.

Happy holidays to everyone!

November 23, 2004
The Tower of Chocolate was featured on the front page of today's Idaho Statesman along with a great picture. If you haven't yet had the opportunity to try a chocolate fountain, you are missing a treat. According to Thelma, the fountain owner, men are as fascinated with the concept as are women and children.

I have taken on the responsibility of mentoring a high school senior through her senior project. She will job shadow for 5 months, attending planning sessions, meetings with merchants, and actually attending a couple of events, as well as helping at a wedding show. I have worked with high school and college students in the past, but this is the longest project I have been involved with. If you haven't shared your expertise with students, you are missing a great opportunity. All of us have something that we do well that we can share with others to increase their knowledge. It is particularly satisfying to learn that they got a good grade on their project or paper because …
Post a Comment
Read more

Gifts That Keep on Giving

November 08, 2004
Today I read about a couple in Washington who asked for international telephone calling cards for wedding gifts. They received 60 of them and then donated them to a national guard unit being deployed to Iraq. If you are planning a wedding, birthday, or anniversary party, or another event where gifts are given, you can use your event to benefit others too.

If you have a favorite charity, you might ask for items they need; perhaps canned food for a food bank, clothing or sleeping bags and blankets for the homeless, baby clothes for a crisis pregnancy center, food for an animal shelter - the list could go on and on. It is considered poor form to mention gifts in an invitation, but you can verbally tell people what you would like to do when they ask. Your guests may be very happy to give to a good cause.

November 02, 2004
Thanks to those of you who find information here to be of interest. Some of the businesses mentioned in our posts have indicated that they are receiving e-mails and calls as a result of this blog. We would love to hear your comments as well. If you found a merchant to be particularly helpful or you had a bad experience with a merchant (please don't list specific business names), others can learn from your experiences, so please share with us.

If you have heard about or experienced a unique idea related to special events, let us know as well.

Chocolate Fountains - a New Item on the Local Scene 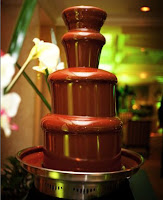 Have you yet used a chocolate fountain at your event? They are the latest rage all over the country. The fountain is about 3 feet tall and made of tiers of stainless steel. The base contains a motor and pump. Finely cut pieces of chocolate are placed in the base where it melts. The melted chocolate is then pumped up through the center of the fountain and spills down the sides. Guests use skewers to dip fruit, cake, and other items into the cascade of chocolate. Fountains must be used indoors, where they won't attract gnats and other small insects.

High quality chocolate that doesn't contain wax or other additives is used so it doesn't interfere with the working parts of the pump. The machine must be cleaned immediately after use to remove the chocolate before it hardens. Therefore, you won't usually find a chocolate fountain at a rental center. Instead, most belong to small owner-operated businesses. This is a great part-time business for anyone who is looking for a s…
Post a Comment
Read more 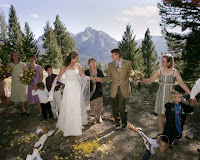 We held our first mountain top wedding in September in the Sawtooth Mountains of Idaho near Stanley. The ceremony was held on top of Elk Mountain with a great view of Mt. McGowen in the background. Guests drove up the mountain on a narrow one-lane dirt road. After parking, they hiked to the top of the mountain. Even an 85-year-old guest from Iceland made it, as well as someone on crutches. Guests stood during the ceremony, then departed back down the mountain to the reception held in Elk Meadow, about 5 miles away.

Everything had to be trucked into the area from Boise, 128 miles away and over two mountain summits - tent, tables, chairs, linens, dance floor - you name it. We hired a 7-piece rock and soul band that also came from Boise, as did the florist, who personally delivered the flowers. The caterer came from Hailey.

The festivities began two days before when the wedding party and families gathered for a special pre-rehearsal dinner at the Stanley Community Center. The next eveni…
Post a Comment
Read more 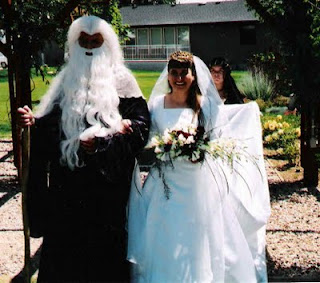 Our first Medieval wedding was held June 19th at a winery. The groom looked like Henry VIII. The father of the bride was Merlin, complete with long white beard and hair. The minister was dressed as Friar Tuck. The catering staff all dressed as jesters. The bride found her gown, complete with bishop's sleeves, at a local bridal salon. About a third of the guests, including yours truely, were in costume.

The ceremony occurred in front of a waterfall. Dinner was served family-style at long tables and included whole turkey legs for true Henry VIII authenticity. The couple did, however, add a modern wedding cake. It was decorated with fleur de lis and griffens and topped with two pewter dragons forming a heart. They cut the cake with a dagger. It was a fun and unusual wedding, one we will long remember.

Add Balloons to Your Special Occasion

If you are planning a wedding or reception, consider placing a balloon arch over your dance floor or in front of the entrance to the room. From the bridal shower to the rehearsal dinner, the ceremony to the reception, balloons can be used in centerpieces and in other ways. They can be incorporated into floral arrangements or combined with ribbons, fabric, and other items to create a unique look.

Balloons can make a unique statement when used as holiday decorations for your company party or picnic. Consider a Christmas tree made of balloons, or a balloon snowman or Santa. How about a large heart for Valentine's Day or a palm tree for your luau.

Remember to Be Thankful

May 18, 2004
One of the most frustrating things for those who attend a wedding, shower, birthday party, reception, anniversary party, or another event where gifts are given is the perceived lack of gratitude shown by those who are given gifts. Guests spend time and money to purchase a gift, yet many people fail to say thanks.

Though we are becoming an increasingly casual society, let's not forget our manners. Let's remember those who took the time to do something special for us by letting them know we appreciate their effort.
Post a Comment
Read more

Introducing the "Main Event," a Blog for Those Who Enjoy Event Planning and Special Events

March 20, 2004
Whether you are a business owner who is planning a conference, grand opening, or another event or you are a bride, daughter, son, grandchild, or anyone in between who may be planning a special event, this site is for you.

Planning an event can be stressful and confusing, particularly if you don't do it often. In this blog we will offer suggestions and how-to ideas to help you create a unique and memorable event that you, your guests, employees, and friends will long remember.
You will also find commentary on trends, both good and bad, and other topics that may be of interest to anyone who loves special events. Be sure to check back regularly to find out what's happening in the event planning world, particularly in southwestern Idaho.